The PASCO Millikan Oil Drop Apparatus is designed to conduct the Millikan Oil Drop Experiment where the electric charge carried by a particle may be calculated by measuring the force experienced by the particle in an electric field of known strength. Although it is relatively easy to produce a known electric field, the force exerted by such a field on a particle carrying only one or several excess electrons is very small. For example, a field of 1000 volts per centimeter (105 volts per meter) would exert a force of only 1.6 x 10-9 dyne (1.6 x 10-14 newtons) on a particle bearing one excess electron. This is a force comparable to the gravitational force on a particle with amass of 10-l2 (one million millionth) gram (10-15 kilogram). The success of the Millikan Oil Drop experiment depends on the ability to measure forces this small. The behaviour of small charged droplets of oil, having masses of only 10-12 gram (10-15 kg) or less, is observed in a gravitational and an electric field. Measuring the velocity of fall of the drop in air enables, with the use of Stokes’ Law, the calculation of the mass of the drop. The observation of the velocity of the drop rising in an electric field then permits a calculation of the force on, and hence, the charge carried by the oil drop. 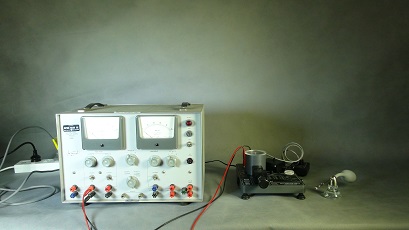 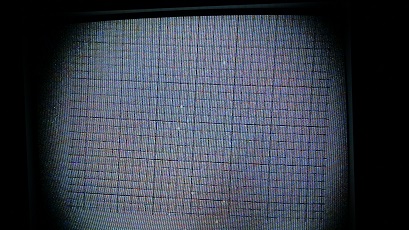 With the lever on the Chamber on Spray Position. Place the mineral oil atomizer into the hole at the top of the atomizer. Squeeze the atomizer until the oil droplets can be observed on the Monitor. Place the lever to the off position. Oil droplets should be observed to slowly fall down with gravity. Turn on the power supply to a voltage of 300V or more. Introduce more oil drops if necessary. Place the lever on the Chamber to Ionization On, will cause oil drops to be ionized positive or negative. Switching the Plate Charging Switch to positive or negative, oil drops will be observed to either go up or down with quantized speed depending on the charge on the oil drop. Reversing the Plate Charging Switch. The drops will reverse direction. Placing the Place Charging Switch in the grounded position will cause the oil droplets fall down with gravity.