To demonstrate the stabilisation properties of gyroscopes 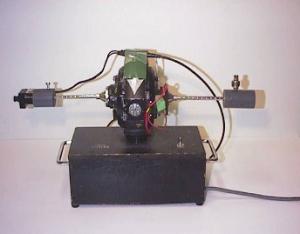 A spinning wheel in a gyroscope maintains its orientation in space even if its axle supports twist and turn. This is because tilts imposed on one point on the wheel cancel out when the wheel rotates through half a turn into a new position. Another way of saying this is that the angular momentum of the wheel cannot be changed unless there is a torque on the wheel. So in this demonstration a torque is applied by hanging small weights on the horizontal axle of the wheel. If the wheel was not spinning this would cause the wheel to immediately tilt sideways due to the unbalanced effect of the small weight. But with the wheel spinning, the whole system precesses in the horizontal plane because the rotation continually corrects the tilt.  Our wheel is actually made from the internal mechanism of a gyro compass originally fitted to an aircraft. The constantly spinning wheel maintains its orientation regardless of the tilting and turning of the aircraft.