To demonstrate that a large difference in pressure can create a propulsive force. 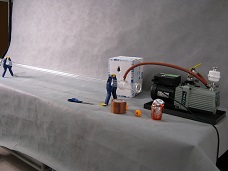 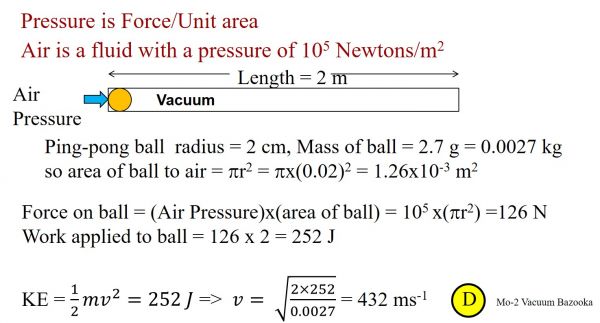 The vacuum bazooka consists of a 2m length of PVC tube modified to have an attachment on the side for connection to a backing pump. The apparatus is setup and levelled, ensuring that a safety shield (thick corrugated cardboard box) is in place to intercept the projectile. Scotch tape is attached to the flange on the end opposite from the vacuum hose attachment. A ping pong ball is then placed in the other end of the tube. This end is then sealed with scotch tape and the apparatus evacuated. More impressive action occurs if the pump is left running. The tape will be seen to buckle inwards due to the external atmospheric pressure after 30 seconds.

The end where the ping pong ball was admitted may be pierced with a pen knife resulting in a loud explosion as the atmosphere enters the pipe. The ping pong ball is propelled through the tube and out the further end crashing into the safety shield which is normally placed 1m from the exit flange.

Alternatively, an empty Aluminium can may be placed 10 cm from the exit flange and on operation will be seen to be destroyed by the emerging ping pong ball. Due care must be taken to ensure that ricochets will not hit any member of the audience.

Warning: the tape could burst at any time and from either end if not connected correctly. DO NOT stand anywhere in the line of action of the tube. It has been shown that the Kinetic energy of the ping pong ball on emergence from the tube is similar to that of a .22 rifle bullet. Air resistance will slow the ping pong ball to safe values within a distance of about 5 meters however it is suggested that a minimum safety distance of 10 meters be used.