To illustrate some of the unique properties of the cycloid. 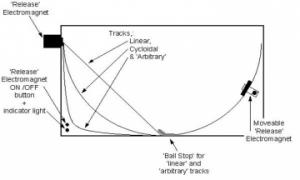 The Cycloid is the path of a point P(x,y) on the rim of a rolling wheel. where:

Two properties of the cycloid are:

1. The cycloid is the path of most rapid descent from A to B of a particle subject to gravity, initially at rest. Balls may be `raced' along the three paths to see which wins.

2. On a cycloid, the time of descent (from rest) from A to B is the same as from an arbitrary point C to B. Therefore, balls released simultaneously from A and C will collide in the middle at B.